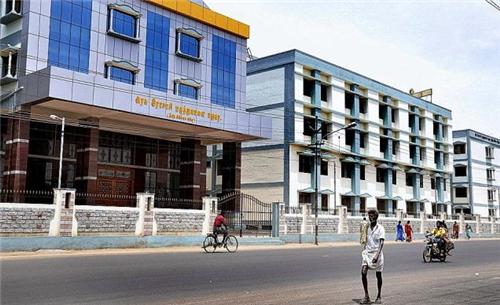 Situated in the heart of Madurai city, Government Rajaji Hospital offers affordable and quality health care services to all the patients. It was established in the year of 1842 and completely taken over by the Municipality of Madurai. Holding a total area of 12.47 acres, the hospital is considered to be the major health care center for various surgeries and advanced treatments. Popularly known as Erskines hospital, Government Rajaji Hospital holds a bed strength of 1574 patients. It is important to know that the government hospital is equipped with modern bio-medical equipment and technologies.

Madurai Medical College is located inside the building of the government hospital in Madurai. Some of the special features of the hospital include 24 hours causality facility, 24 hours bio-chemistry lab facility, artificial limb centre, master health check up, cobalt therapy treatment, school of nursing and much more. This health center serves as a tertiary level referral hospital for all the private medical college hospitals in South India.

Large number of speciality treatments is available in the Government Rajaji Hospital such as Open Heart Surgery, Closed Heart Surgery, Endocrinology, Nephrology, Plastic Surgery, Neuro Surgery, Obstetrics and Gynaecology, Paediatric Surgery, Vascular Surgery and so on. Recently, the hospital has developed an improved “neo-natal intensive care unit” and an exclusive wing for master medical check-up. Added to this, the plastic surgery and ophthalmology department has been renovated at a total cost of Rs 16 lakh.

The Government Rajaji Hospital has a separate diagnostic equipment to test and find out the chest diseases, brain diseases, bone and spinal disorders. It is believed that this sophisticated equipment is more accurate than the C.T. Scan.  The hospital advisory committee holds a team of dedicated members that include Dean, Voluntary Organization Members, People Welfare Association, Sub Divisional Officer, Medical Officer, Madurai Corporation Mayor and so on. The Directorate of Medical Education holds a number of government health centres in various areas in Madurai. Usually, the patients from Government Rajaji Hospital visit the following centres to get treated in a right manner.

Few reports have estimated that the blood bank of Government Rajaji Hospital has created a record by collecting excess blood from donors. Around 20,354 units of blood were collected by the hospital in various camps and units. People from different parts of the city have started to show great interest in contributing their blood to sick patients who are in need.