The history of Madurai dates back to pre-Christian era, while it is one of the ancient cities in the country. There are various historical monuments in Madurai city. Moreover, these historical monuments remain as a major tourist attraction and are very frequently visited by Indians as well foreign travellers.

Madurai was firstly developed into a heritage city by the great Sangam rulers. They set up their supremacy in such a way Madurai city was completely flourished in all aspects of heritage and culture. In later years, Madurai city was ruled by the Vijayanagar emperors and then the Nayakas took over the entire kingdom.  Nayakas also did the best part during their empire.

The importance and growth of Tamil literature took place during the Sangam rule. It is said to be ‘the golden age of Tamil literature’.  Thus there are numerous learning centres and Universities spread in Madurai City. Furthermore, the places of learning, monuments and temples in Madurai mark out the rich intellectual heritage of India.

Madurai city, one of the best historical place remains as an archaeological wonder.  Situated in the hilly territories of the Western Ghats, Madurai City stays as the best tourist spot round the year. 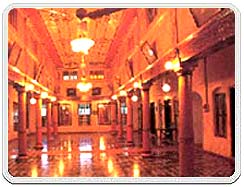 One such example of the best archaeological wonders of India in Madurai is the Sivaganga Palace. It is located exactly about 40 kilometres from Madurai. It was built in 1730’s. This palace is very famous as Gowri Vilasam. From the date of Sivaganga Palace construction, it has attracted millions of tourists coming from various countries. You can explore the glorious heritage of the country by visiting this beautiful palace. It is said that the ancient Marva kings were ruling this part and it definitely reminds of their splendid tradition spread all over the palace. The Sivaganga palace is built up in the manner of the Thirumalai Nayaks.  Additionally, all these mark out the prosperous style of the Rajputana Architecture.

Inside the Sivaganga Palace -The Raja Rajeswari Temple

The Raja Rajeswari Amman Temple in Madurai was built by the Royal family and it is still now continues to stay as the famous tourist spot in the city of Madurai. Another interesting aspect of the Sivaganga Palace is the Nadai Kinaru. It is actually a tiny swimming pool with direct connections of fresh water.  It is said that Nadai Kinaru was meant primarily for the women of the noble family.  You can enjoy watching its architectural splendour mainly in the front portion, where the paintings on the sides and on dome in natural shades are still undamaged.

How to Reach: As it is located very close to the city, the tourists can take up taxis or bus to reach SIvaganga Palace. It is very easy reachable to tourists.
Address: Raja Rajeswari Temple, Bank Colony, Madurai to Rameshwaram Road, Viragnoor, Madurai, Tamil Nadu – 625 009.
Timings: The temple is open on all auspicious days and on weekdays to the public. You can visit the temple on Wednesdays between 6.30 to 8.00 A.M or 6.00 to 8.00 P.M.

This is a 17th century Palace built by the king 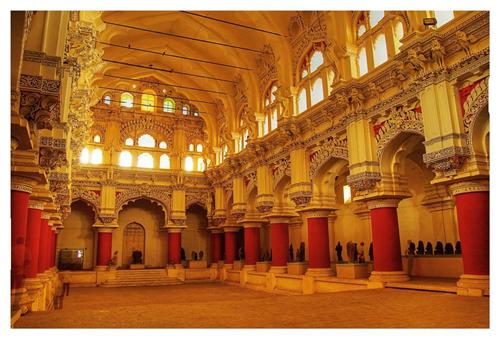 in 1636 A.D.  This palace is built in the classic fusion of Islamic and Dravidian styles (i.e.) Indo Saracenic Dravidian structural system. The entire Thirumalai Nayak Palace was constructed by an Italian architect. Moreover, Thirumalai Nayak Mahal is ranked one of the wonders of South India.

How to reach: Thirumalai Nayak Mahal is just 2 kilometres south east of the Madurai Meenakshi Amman Temple.  You can plan your trip from the famous Meenakshi Temple, which you can hire a taxi or a direct bus to reach Thirumalai Nayak palace.
Visiting Timings: The palace is open from 9.00 A.M to 5.00 P.M on all days. The sound and light show in English starts at 6.45 P.M to 7.35 P.M and in Tamil starts at 8.00 P.M to 8.50 P.M.