Due to the rise in number of active players and cricket lovers, Madurai has formed the “Madurai District Cricket Association” in the year of 1958. The association was developed with the support of many cricket philanthropists from various industries. Moreover, the main motive of MDCA is Patience, Perseverance and Performance (3P’s).

It is important to know that the governing authorities conducted a number of tournaments such as EKTA Tournament, Rajamannar Memorial Tournament, YMCA T20 Tournament and so on. Further, the Madurai District Cricket Association (MDCA) has revised and re-written the laws of cricket to improve a unique character of the national sport. The main aim of framing the rules is to incorporate all the important points into action enabling the cricket players to play at different levels. This cricket association has close connection with all the full member countries of the International Cricket Council (governing body of the game). Each of the cricket players in the district association has to strictly follow the cricket rules incorporated by the head department. If the player does not follow the law of cricket, then the person will be immediately suspended from the team.

Under the Madurai District Cricket Association, there are number of clubs which are divided as I Division ‘A’, I Division ‘B’, I Division ‘C’, II Division ‘A’ and so on. Each of the division holds a set of clubs under which a team is formed to play in the cricket tournaments. Madurai took the first step on the international terrain with Mr N. Kannayiram. He is an international test cricketer and was selected to the Indian National Cricket Team that toured West Indies in 1953. Later, the player was appointed as the first secretary of MDCA. Madurai is popular amongst the other districts of Tamil Nadu for producing two great international level cricket players – Mr. N. Kannayiram and Mr. M. Venkataramana.

Some of the cricket league matches conducted by the Madurai District Cricket Association are explained in the following:

The District Cricket Association is managed and administered by a team of authorities that include Mr. Essa Yusuf (President), Mr. P. Krishnan & Mr. Y. Syed Ibrahim (Vice Presidents), Mr. S. Gangaram Singh (Honoraray Secretary) and more. In order to improve the performance in the tournaments, the authorities have divided the players into four teams controlled by a coach and a manager. MDCA has marked its presence in the world by giving admirable world class cricketers. Over 53 years, MDCA had many enthusiastic office bearers. In spite of being from different educational disciplines, they sincerely fulfilled their responsibilities and achieved great heights for the association. 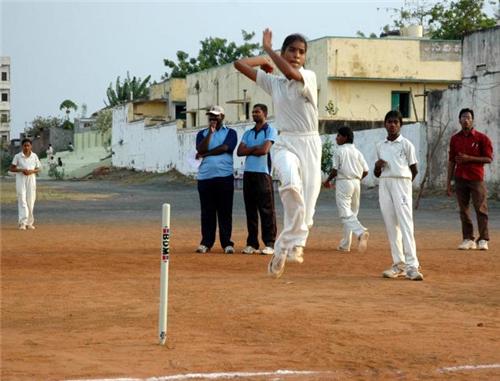 The MDCA has conducted many coaching camps and cricketing activities regularly for players and cricket lovers. To help the MDCA in fulfilling its objectives, the association has created 6 committees – League Sub Committee, Umpiring Committee, Food Committee, Grounds Committee, Media Committee and Advisory Committee. The MDCA organized regular matches between various cricket clubs to enhance the players’ competitive spirits, strengths and durability. The association was highly improved due to the generous contributions of the TVS group and other prominent industries like Madura Coats and many educational institutions.

Explore more about Sports in Madurai