Madurai Meenakshi Temple is one of the oldest and biggest temple is South India.  This temple is also referred as ‘Meenakshi Sundareshwara Temple’, with two temples - Devi as Meenakshi and Shiva as Sundareshwara is located at the same place. If you are planning for a mind peaceful devotional trip, Madurai is the best place to visit. You will experience a clear peace of mind and refreshing inner spirit that no other place can make you feel. Its sculpture and architecture are known all over the world. 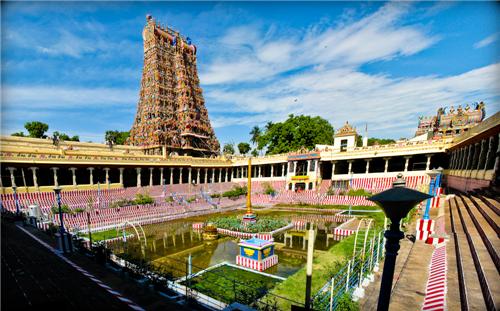 Moreover, if you are planning your stay during the period of Chitirai festival (i.e.) during the months of mid April-May make sure you book your travel and hotel tickets in advance to avoid any confusions or disappointments.  This is a 12 day festival which people from all over the world gather at Madurai city to watch the carnival.

The second Pandya king Malayadwaja Pandya and his wife Kanchannamal did not have children for a long time and they offered several prayers and sacrifices in want of childhood. While offering sacrifice, there suddenly appeared a small girl from the holy fire. It is said to be Goddess Parvati who has come in the avatar of Meenakshi in order to answer the prayers of the Pandya King. The meaning of the name ‘Meenakshi’ means fish eyes. It is derived from the words, Meen refers to fish and Aksi means eyes. The girl who appeared from the holy fire had three breasts. The king and his wife were shocked but the voice from the heaven told not to worry and also told that the third breast of the girl would disappear once the girl meets her future husband. This brought tremendous relief to their cry and the couples were very happy. The king named her girl ‘Tadaatagai’. She was crowned as the heir of the Pandya throne. Tadaatagai was given training in all fields of science (i.e.) in 64 sastras. The time came for coronation, which Tadaatagai has to wage war on the three worlds from corner to corner of eight directions.   Tadaatagai successfully conquered Vishnu’s abode Vaikunta, Brahma’s abode Sathyaloka, and Deva’s abode Amaravathi. Finally she went forward to conquer Shiva’s abode kailasha. Tadaatagai easily defeated the army of Kailasha and the celestial bull of Shiva, Nandi. But the moment she looked at Shiva, she was not able to fight. She felt shy and bowed her down. That was the moment she realized that she is the personification of Parvathi.

Both Tadaatagai and Shiva moved to Madurai, which the king celebrated the coronation ceremony in a very grand manner followed by her wedding with Shiva. It was said that the marriage of Shiva and Tadaatagai was marked as the biggest grand event on whole Earth that took place in Madurai. Vishnu the brother of Meenakshi travelled to Madurai to attend the wedding from his divine abode at Vaikuntam.  After the marriage, Shiva and Meenakshi ruled Madurai for a long period and then their divine form is assumed as Sundareshwarar and Meenakshi who are the deities/holy being of the temple.
To mark their union, even today every evening before closing the Madurai Meenakshi temple a ritual parade is carried out with brass and drummers brings the image of Sundareshwarar to Meenakshi bedroom to accomplish their union. It is again taken back the next day early morning exactly at dawn. The marriage of Meenakshi and Sundareshwarar is celebrated as Chithirai Thiruvizha every year in Madurai on a very a grand manner.

During the Nayakar period, the ruler Thirumalai Nayakar linked the festivals Azhagar Thiruvizha and the wedding ceremony, Chithirai Thiruvizha. Later, the king of Devas, Indra founded the Meenakshi Amman temple while he was travelling on a pilgrimage to alleviate his misdeeds. He felt that his burden was completely lightened when he neared the swayambu lingam of Madurai. Swayambu lingam is a self created lingam representing Shiva that is used for worship in all temples. He was surprised with the miracle and built a temple with preserving the lingam there. Indra started to worship Lord Shiva that caused the beautiful golden lotuses to emerge in the pool near-by. Moreover, Tamil literature speaks and teaches about the Madurai Meenakshi temple for last several millennia.  There were number of poems and songs written in praise of Lord Shiva and Goddess Mennakshi. One such to state is, Thirugnanasambandar a famous Hindu following Saiva philosophy has mentioned that this is an early 7 th century temple and has depicted the idol as ‘Aalavai iraivan’.  Moreover, it is believed that the temple was discharged by an infamous Muslim raider Malik Kafur in 1310, which all the ancient rudiments were destroyed.   The first ruler of Nayak Dynasty, Vishwanatha Nayak took essential steps to reconstruct the structure during the period 1559 – 1600. It was done under the care of   Ariyanadha Mudaliar who was founder of the Poligar System and the prime minister of Nayak dynasty. Vishwanatha Nayak took real steps and cautions to design and erect the structure of temple. He did many renovations in order to craft complexes inside the temple. His main contributions are Killikoondu Mandapam – corridor of parrots and Vasantha Mandapam for celebrating spring festival (vasanthorsavam). Rani Mangammal constructed the Meenakshi Nayakar mandapam and the corridors of the temple tank.

There are about 50 priests in Madurai temple who perform the rituals (pooja) on daily basis as well as on festival basis. The temple holds six time pooja calendar every day, which each consists of four rituals. They are abhisheka – sacred bath, alangaram – decoration, neivethanam – food offering and deepa aradanai – waving of lamps performed for Lord Sundareswarar and Goddess Meenakshi. Moreover, the worship (Thepuja) ceremonies are held amidst music tavil – percussion instrument, nagashwaram – pipe instrument, religious instructions in Vedas by temple priests and prostration by parishioners in frontage of the temple post. The temple priests of the Meenakshi temple belong to Shivaite to the Adishaivas, which is a Brahmin sub-caste. They live in a closed area, in north of the temple.
Margazhi ritual that is celebrated between December and January is one of the famous one for engaging a faultless god like husband. It is popularly called as Meenakshi ennai kappu festival. The most common practise of this temple is to worship Goddess Meenakshi before Sundareswarar.
To conclude, visiting the Madurai Meenakshi temple is real worth on Earth as it portrays the brilliance of culture and art.

Foreign visitors as well as tourists from India voluntarily take part in social service scheme at Meenakshi temple. You will come across a new different experience by helping and bringing smile on innocent poor children. The social services include free marriage scheme, karunai illam, moral and spiritual educational classes, and other social activities like helping pilgrims coming from different parts of the world, special lodges for travellers – Birla Vishram at affordable rates, special prayers, mercy home and more.

Madurai Meenakshi Amman Temple is one of the favorite religious places that attract tourists from all over the world.  With visiting this temple, you will surely explore a fresh feel of ancient culture and tradition hidden behind the soil of prestigious Madurai.