MGR Race Course Stadium in Madurai is considered to be the most popular stadium of the city. It hosts several national sporting events and competitions. Many national and international level Kabaddi championships have been held in the stadium. Further, the Madurai District Electricity Department conducts several Kabaddi championships at the stadium every year. In order to encourage and motivate the local youth, smaller level district competitions are held on regular basis.

Some of the popular tournaments held in MGR Race Course are: 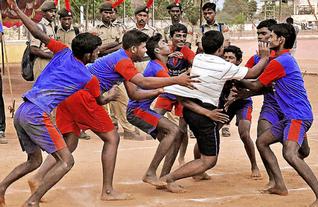 Guru Mariappan Shenbagam Foundation, Paralympic Committee of India and Paralympic Association of Tamil Nadu recently organized the “Paralympic sports meet” for the physically challenged people in the stadium. It was conducted to identify the potential talents of the handicapped children and offer them effective training to become world-class Paralympic athletes.

The stadium is well constructed and provides ample space for the visitors to park their vehicles in the large parking area. MGR Race Course Stadium has a world class synthetic track which is built specially for the convenience of athletes. Apart from athletics, the stadium supports many other sports activities in the city.

Let’s have a look at the numerous facilities provided by the MGR Race Course Stadium:

Explore more about Sports in Madurai