Sculpture and Paintings in Meenakshi Temple 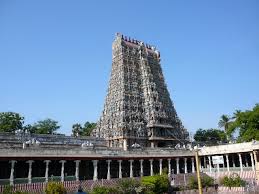 Said to be the oldest city in South India, Madurai is a great historical place that stands on the banks of the sacred river Vaigai. The city’s fame entirely lies on the famous “Meenakshi Temple” dedicated to Lord Sundareswar and Goddess Meenakshi. Popularly known as Meenakshi Sundareswarar Temple, the beautiful temple was constructed during the region of Chadayavarman Sundara Pandyan in the 12th century. It is important to know that the temple displays a splendid architecture which holds over 14 gopurams, sculptures, paintings, mandapams and so on.

This ancient temple is widely famous for its annual festival named “Meenakshi Tirukalyanam Festival” and it is celebrated for the past 10 years. Inside the temple premises, the Nayakka rulers developed a number of Mandapams such as Hall of Thousand Pillars, Puthu Mandapam, Ashta Sakthi Mandapam, Nayakkar Mahal, Vandiyoor Theppakulam and more. Porthamarai Kulam is considered to be the holy temple pond which is believed to be the judge of new literature. Few records have estimated that the temple attracts 15000 visitors in a day. The entire property of the Madurai temple is under the administration of the CE and HR department of Tamil Nadu.. Moreover, the government authorities have framed a set of rules to be followed by the devotees and tourists inside the temple premises.

Situated in the heart of the city, Madurai Meenakshi Temple has four entrances in North, West, South and East sides. Kilikoondu Mandapam is placed around the sanctum of Meenakshi temple where the green parrots are trained to utter the name of the goddess. Now, let us have a quick look at some of the halls inside the temple below: 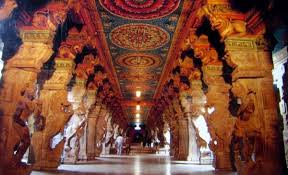 The Ashta Sakthi Mandapam (Hall of eight Goddess) is placed in the eastern side of the Amman Sannithi. This mandapam was initially constructed by the queens Uruthirapathiammal and Tholiammal who were the wives of Thirumalainaicker. Inside the hall, eight forms of Goddess such as Lord Shiva, Rowthiri, Vaishnavi, Yangnarubini, Manonmani, Mahalakshmi, Shyamala and Maheswari have been sculptured in the pillars of the mandapam. You can also see a number of drawings depicting the life of Meenakshi Amman on the roof of the hall. Statues of Vallaba Vinayagar and Murugan are developed at the entrance of the mandapam. The Ashta Sakthi Mandapam has a dedicated lamp-holder with 1008 lamps and it is widely used during the festive occasions.

In this mandapam, the tourists can check the Nandi (sacred bull statue) which has various manifestations of Lord Shiva. Added to this, the hall contains the sculpture of Marriage of Meenakshi and it is considered to be a special one among all other statue. If you are into the temple, then make sure to visit the golden flagstaff that is surrounded by a number of gods (Durga and Siddar). 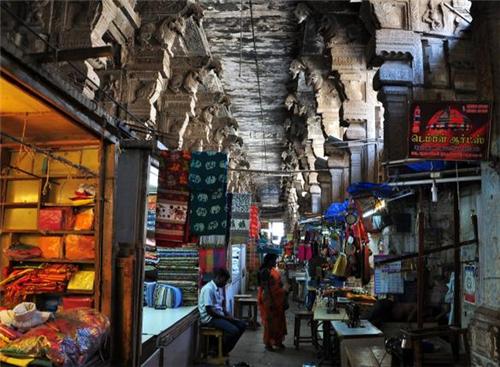 Constructed by King Thirumalai Naicker, the puthu mandapam is situated opposite to the East Rajagopuram. This mandapam is often referred as Thirumalai Naicker Choultry and Vasantha Mandapam. Further, the sides of the new hall are carved with statutes of popular leaders of the Nayak Dynasty. In order to create a beautiful outlook, Sumandira Moorthy Asari depicted the scenes of Meenakshi celestial wedding, Oorthandavar, Sankaranarayanan, Bramha, feeding the granite elephant with sugarcane, Arthanareeswarar and other sculptures. It is essential to know that there around 25 poses of Lord Shiva carved on the pillars of the Puthu Mandapam.

Ayiramkal Mandapam, one of the largest halls in the entire temple complex is situated near Veeravasantharayar Mandapam to the north. Holding a total of 985 pillars, the idol of Chira Sabha of Lord Natarajar is placed in the centre of the mandapam. You can also find the statues of Thiripurandhakar, Lord Muruga on peacock, Nirutha Ganapathy, Saraswathy and hunter in the eastern entrance of the hall.

This is a newly build hall that bears the name of saindy queen Mangayarkarasi who contributed to Tamil language. There are number of halls near to the Mangayarkarasi Mandapam including Servaikarar Mandapam, Kolu Mandapam, Nagara mandapam and so on. 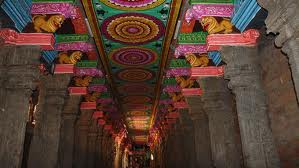 The paintings displayed in the Meenakshi Temple tell us about some of the miracles of Lord Shiva and also the life of Meenakshi. In few drawings, the incidents of the Thiruvilayadal and drams of Lord Shiva are also clearly depicted. Due to less care, many of the paintings have been destroyed and they are shifted to museum in the 1000 pillar hall. Some of the popular paintings in the Madurai Meenakshi Temple include Thiruezhukootrikkai drawings, Panchakkasabhai drawings and much more.

In the Thiruezhukootrikkai drawings, the songs sung by Nakkeerar have been sketched in the shape of a chariot in the Petchiakkal mandapam. The picture of Panchaga Sabhas of Tamil Nadu is also depicted in the wall of the temple. All these paintings can be seen on the roof of the Palaya Unjal Mandapam in the eastern side of the Unjalmandapam. One can also look over the paintings of the deities such as Lord Muruga, the Goddess & God, eight sakthis, Lord Ganesha, etc. In the old kalyana Mandapam, there are drawings which depict the earth and heaven on both sides of the wedding stage.